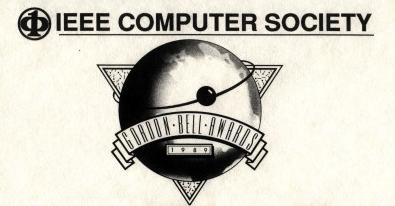 The Gordon Bell Prize 2010 has been awarded at the Supercomputing Conference SC10 in New Orleans yesterday November 18. We are very happy to announce that Prof. Thomas Schulthess (ETH Zurich and CSCS), Anton Kozhevnikov (ETH Zurich) and Adolfo G. Eguiluz (University of Tennessee, Knoxville) received the honorable mention for special achievments in scalability for their project:

Schulthess and his team used for their work the Cray XT5 at Oak Ridge National Laboratory’s Leadership Computing Facility (ORNL).

A special mention is warded to the entry whose performance is short of that of the Peak Performance prize, which nevertheless utilizes innovative techniques to produce new levels of performance on a real application. Such techniques may be, for instance, in mathematical algorithms, data structures, or implementations.

The peak performance: award has been awarded to team led by George Biros is a Gordon Bell Prize finalist at SC10 for their work demonstrating the simulation of blood flow using heterogeneous architectures and programming models at the petascale using CPU and hybrid CPU-GPU platforms, including the new NVIDIA Fermi architecture and 200,000 cores of ORNL’s Jaguar system.

The low price/performance: prize has awarded by a team lead by Tsuyoshi Hamada (Nagasaki University) for

190 TFlops Astrophysical N-body Simulation on a Cluster of GPU

We would like to thank Vittoria Rezzonico of EPF Lausanne and hpc-ch member for having reported this winners directly from the SC10 conference.