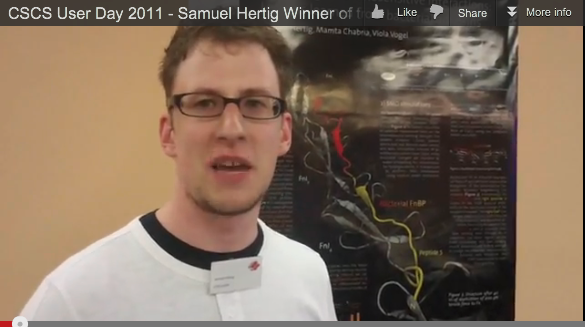 The CSCS User Day brought together around 60 users in Lucerne on 23 September. Exciting scientific lectures, lively two-minute personal poster presentations by scientists and discussions were the order of the day in Lucerne.

Highlight of the day were three scientific presentations. Jeroen Tromp of Princeton University presented an ingenious method to create a realistic simulation and image of the Earth’s crust and its mantle under Europe. Lucio Mayer of the University of Zurich presented his latest research work, in which he and his team succeeded for the first time in achieving a detailed simulation of the origin of the Milky Way. Rustan Khaliullin from the group led by Michele Parrinello, a professor at the ETH Zurich and the Università della Svizzera italiana, concluded the series of scientific lectures with a presentation of the latest research breakthrough in the simulation of molecular dynamic processes.

In addition CSCS informed about the planned updates of the HPC infrastructure and presented  programming techniques for GPU computer architecture.

More than 20 users presented posters of their research work at CSCS. The poster of Samuel Hertig (ETH Zurich) received the “Best Poster Award”.

CSCS reported with additional details and information on the User Day »