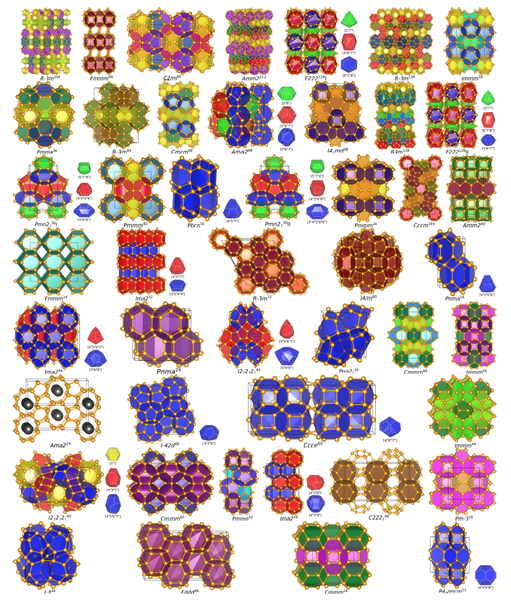 Supercomputers allow researchers to discover previously unknown materials and to predict their properties based on theory. There is currently a great deal of interest in materials that could be used for producing renewable energy and for energy storage. Researchers from the University of Basel are using the Piz Daint supercomputer at CSCS to search for more efficient solar cells.

The search for new sources of energy is turning its attention to previously undiscovered materials – materials, for example, that are made up of special crystalline configurations of silicon that can absorb sunlight far more efficiently than traditional silicon-based solar cells. Conventional silicon solar cells have a relatively low absorption coefficient and therefore absorb light only weakly in the main region of the solar spectrum.

A material’s properties are determined by its crystal structure and stoichiometry (the quantity and type of elements from the periodic table that make up the material). Materials with the same stoichiometry but with different crystal structures can have completely different properties. One well-known example of these so-called allotropes is carbon, which occurs in two forms that could not be more different: diamond, a crystal with a so-called metastable crystal structure, a sparkling, crystal-clear and insulating gemstone (with the hardest naturally occurring crystal structure), and graphite, the electrically conductive black material, which is relatively soft and non-transparent.

Stefan Goedecker, Professor of Computational Physics at the University of Basel and his research group have been searching for allotropes with optical properties to make more efficient solar cells. And now, in silicon allotropes, they have found what they were looking for: the latest simulation methods allowed them to find a multitude of different crystal structures and to identify silicon structures that could absorb sunlight better. The silicon solar cells used today are made from an allotrope in which the silicon atoms occupy the same sites as the carbon atoms in the diamond crystal structure. Goedecker and his team had previously found promising silicon allotropes with close structural packing, similar to that of the diamond structure in traditional silicon solar cells but with a higher absorption coefficient; now, they have identified further silicon allotropes with small cavities.

In order to find the optimum silicon structures, the materials researchers carried out elaborate calculations. For a system containing N silicon atoms, there are theoretically 3^N possible metastable states, explains Goedecker. Each structure has a specific energy, and the structure of naturally occurring materials is usually very low in energy. Metastable structures, are in somewhat higher-energy states, in which the crystal or a molecule lies in an energy minimum (local minimum) for a specific period of time. Without outside intervention, metastable structures can take a very long time to revert to the lowest energy ground state – the carbon allotrope diamond would not be sought-after gemstone if it could suddenly turn into graphite.

An astronomical number of possibilities

In investigating metastable crystal forms of silicon, the task is to identify those whose stability is sufficient and which meet the requirements for use in efficient solar cells, namely a high light absorption coefficient. Solar cells made out of such materials could be thinner and therefore more cost-effective to produce. “With the astronomical number of possibilities, however, searching for the ‘correct’ structure is like looking for a needle in a haystack,” says the physicist.

Theoretically, an optimum crystal structure that corresponds to these requirements can be found by computing all of the possibilities, but this is too time-consuming and expensive, even for a powerful supercomputer. In 2004, however, Goedecker developed a method that can be used to directly identify only those metastable structures that have low energies. This makes the search process significantly faster.

Using this so-called minima hopping method (see box), Goedecker and his team have discovered 44 promising metastable clathrate-like silicon structures from a large number of possibilities with the help of the Piz Daint supercomputer. Given that these kinds of structures with cavities have already been successfully synthesised in the laboratory, they are considered promising candidates for efficient solar cells, says Goedecker. For the simulation, the researchers modified their chosen algorithm accordingly, so that the simulation mimics the clathrates’ experimental preparation in the laboratory.

When computing possible structures, there is an energy barrier that must be overcome in order to move from one structure to the next, explains Goedecker. This can be compared to a mountain pass. The Bell-Evans-Polanyi principle, which is frequently used in chemistry, states that the height of the pass will be lower if the process releases a lot of energy so that the final structure represents a low-energy state. The researchers have now turned this principle around: to put it simply, the minima hopping method assumes that a crystal’s metastable configuration, which is reached by overcoming a small energy barrier (the mountain pass), is typically also a low-energy state. This transition is computed using molecular dynamics, and the structure’s energy state is determined using density functional theory (DFT).

Computing the energy state is tricky

As Goedecker explains, however, one problem with predicting the structures is that the energy state of various structures must be calculated to a high level of accuracy. The energy gaps between the individual metastable structures (local minima) are, he says, often so small that the DFT method does not always calculate the structure’s energetic configuration correctly. Therefore, if a material postulated using supercomputers cannot be prepared in laboratory trials, it is often unclear whether this is due to the limitations in accuracy of the computations or because a corresponding synthesis method does not exist yet, says Goedecker. “For example, scientists have tried in vain to prepare the iron-nickel alloy tetrataenite, a magnetic material identified as a ground state by computer simulations.” There is no doubt that the material exists, he says, because it was found in a meteorite.

It remains to be seen whether the newly identified structures can be synthesised. Goedecker hopes, however, that simulations of this kind will open scientists’ eyes to the huge variety of undiscovered materials and will make a key contribution to solving our energy problems.