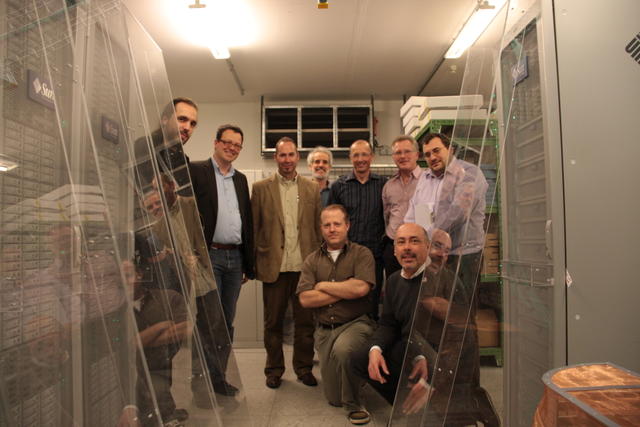 CSCS is happy to announce that  Phoenix PhaseC Upgrade passed today the acceptance test. Phoenix is a HPC system run by CSCS used by the researchers of the Swiss Institute of Particle Physics CHIPP to analyze the data from the LHC experiment at CERN.

The upgrade has been delivered and installed by Sun and will double the computing and storage capacity provided by the previous system (also from Sun). The main characteristics of the new cluster are:

In the next days the system administrators at CSCS will migrate the middleware from phase B to C. PhaseC should be fully operational on Montay, April 19th. You can follow the next steps of the upgrade on twitter: http://www.twitter.com/phoenix_cscs Part of the project team posing in front of the PhaseC system.

Today we also had the handover of the system responsibility from Fotis (right on the next picture) to Pablo. We thank Fotis for all the excellent job made so far. He has helped make Phoenix into a great cluster during these last 18 months, together with Jason and Riccardo, making it challenging for others to achieve the same quality. Pablo has an extensive GRID background and has been working with us for two months, during which time he has learned the daily procedures at CSCS-LCG2 grid site and is ready to succeed Fotis as system lead.