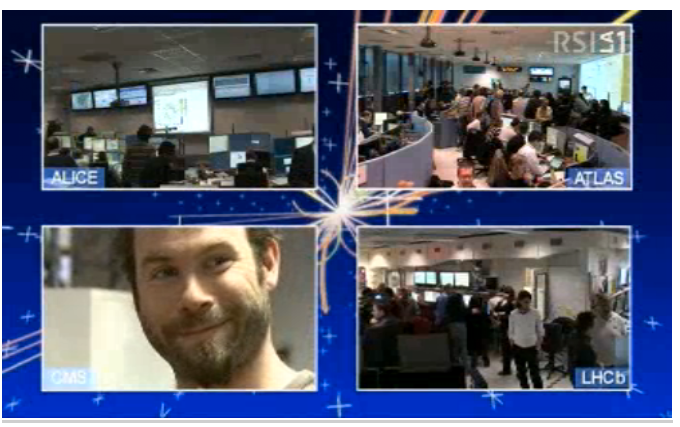 Today has been a special day here at CSCS for the HPC Co-Location Services team: We were following with crossed fingers the first collisions of the LHC collider at CERN. And everything went well! We are very proud with the cluster Phoenix of CHIPP to contribute as Tier 2 to the analysis of the large amount of data that will be produced by CERN.

Here below you may see a screenshot of the live broadcast of this morning. And here below you may read the press release of CERN.

Geneva 30 March 2010. Beams collided at 7 TeV in the LHC at 13:06 CEST, marking the start of the LHC research programme. Particle physicists around the world are looking forward to a potentially rich harvest of new physics as the LHC begins its first long run at an energy three and a half times higher than previously achieved at a particle accelerator.

“It’s a great day to be a particle physicist,” said CERN Director General Rolf Heuer. “A lot of people have waited a long time for this moment, but their patience and dedication is starting to pay dividends.”

“With these record-shattering collision energies, the LHC experiments are propelled into a vast region to explore, and the hunt begins for dark matter, new forces, new dimensions and the Higgs boson,” said ATLAS collaboration spokesperson, Fabiola Gianotti. “The fact that the experiments have published papers already on the basis of last year’s data bodes very well for this first physics run.”

“We’ve all been impressed with the way the LHC has performed so far,” said Guido Tonelli, spokesperson of the CMS experiment, “and it’s particularly gratifying to see how well our particle detectors are working while our physics teams worldwide are already analysing data. We’ll address soon some of the major puzzles of modern physics like the origin of mass, the grand unification of forces and the presence of abundant dark matter in the universe. I expect very exciting times in front of us.”

“This is the moment we have been waiting and preparing for”, said ALICE spokesperson Jürgen Schukraft. “We’re very much looking forward to the results from proton collisions, and later this year from lead-ion collisions, to give us new insights into the nature of the strong interaction and the evolution of matter in the early Universe.”

“LHCb is ready for physics,” said the experiment’s spokesperson Andrei Golutvin, “we have a great research programme ahead of us exploring the nature of matter-antimatter asymmetry more profoundly than has ever been done before.”

CERN will run the LHC for 18-24 months with the objective of delivering enough data to the experiments to make significant advances across a wide range of physics channels. As soon as they have  “re-discovered” the known Standard Model particles, a necessary precursor to looking for new physics, the LHC experiments will start the systematic search for the Higgs boson. With the amount of data expected, called one inverse femtobarn by physicists, the combined analysis of ATLAS and CMS will be able to explore a wide mass range, and there’s even a chance of discovery if the Higgs has a mass near 160 GeV. If it’s much lighter or very heavy, it will be harder to find in this first LHC run.

For supersymmetry, ATLAS and CMS will each have enough data to double today?s sensitivity to certain new discoveries. Experiments today are sensitive to some supersymmetric particles with masses up to 400 GeV. An inverse femtobarn at the LHC pushes the discovery range up to 800 GeV.

“The LHC has a real chance over the next two years of discovering supersymmetric particles,” explained Heuer, “and possibly giving insights into the composition of about a quarter of the Universe.”

Even at the more exotic end of the LHC?s potential discovery spectrum, this LHC run will extend the current reach by a factor of two. LHC experiments will be sensitive to new massive particles indicating the presence of extra dimensions up to masses of 2 TeV, where today?s reach is around 1 TeV.

“Over 2000 graduate students are eagerly awaiting data from the LHC experiments,” said Heuer.  “They’re a privileged bunch, set to produce the first theses at the new high-energy frontier.”

Following this run, the LHC will shutdown for routine maintenance, and to complete the repairs and consolidation work needed to reach the LHC’s design energy of 14 TeV following the incident of 19 September 2008. Traditionally, CERN has operated its accelerators on an annual cycle, running for seven to eight months with a four to five month shutdown each
year. Being a cryogenic machine operating at very low temperature, the LHC takes about a month to bring up to room temperature and another month to cool down. A four-month shutdown as part of an annual cycle no longer makes sense for such a machine, so CERN has decided to move to a longer cycle with longer periods of operation accompanied by longer shutdown periods when needed.

“Two years of continuous running is a tall order both for the LHC operators and the experiments, but it will be well worth the effort,” said Heuer. “By starting with a long run and concentrating preparations for 14 TeV collisions into a single shutdown, we’re increasing the overall running time over the next three years, making up for lost time and giving
the experiments the chance to make their mark.”