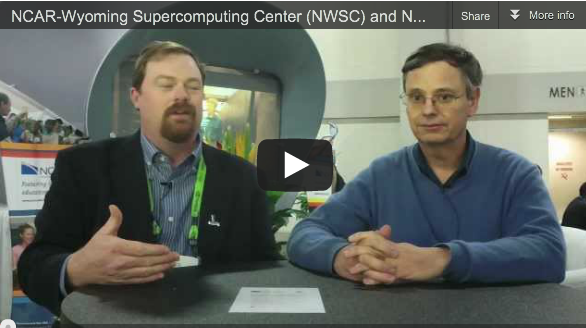 Rich Loft, Director of Technology and Development at the Computing Lab of the National Center for Atmospheric Research (NCAR) and Aaron Andersen (Deputy Director for Operations at NCAR) have been involved from the beginning in the design of the NCAR-Wyoming Supercomputing Center (NWSC).

NWSC has been operational since October 2012 and hosts the Yellowstone supercomputer, the 13th largest system worldwide according to Top500 (November 2012).  NWSC is one of the most innovative and efficient computing centers ever built, taking advantage of Wyoming’s climate to make use of evaporative cooling.

The project started in 2003 when Rich and Aaron realized that the existing center wouldn’t be able to handle future supercomputers that would be multi-megawatt machines with hundreds of thousands of processors to solve problems in earth system science. An essential phase in this project was to look at the computational directions and requirements of NCAR. It resulted that the new supercomputer should be at least 30 times larger than the existing one at that time. In 2009 they defined the project for the building, obtained the necessary funding, and construction began in 2010 through a joint project with the state of Wyoming. The center has been built in a very modular way to be able to adapt to the needs of the next 20 years.

Visitors are welcome at NWSC: From a window they can admire Yellowstone and in the lobby there is an exhibition explaining the scientific problems that NCAR is addressing, how supercomputers work, and how the new center has been built. The final goal is to explain how the work of this center is connected with society and every individual. Through this exhibition, Rich hopes that young people will become exited about their work. In the future, simulation will become even more important in aiding our understanding of  how our earth is developing. The goal is to have the kids saying “Yes, this is something I want to be part of”.