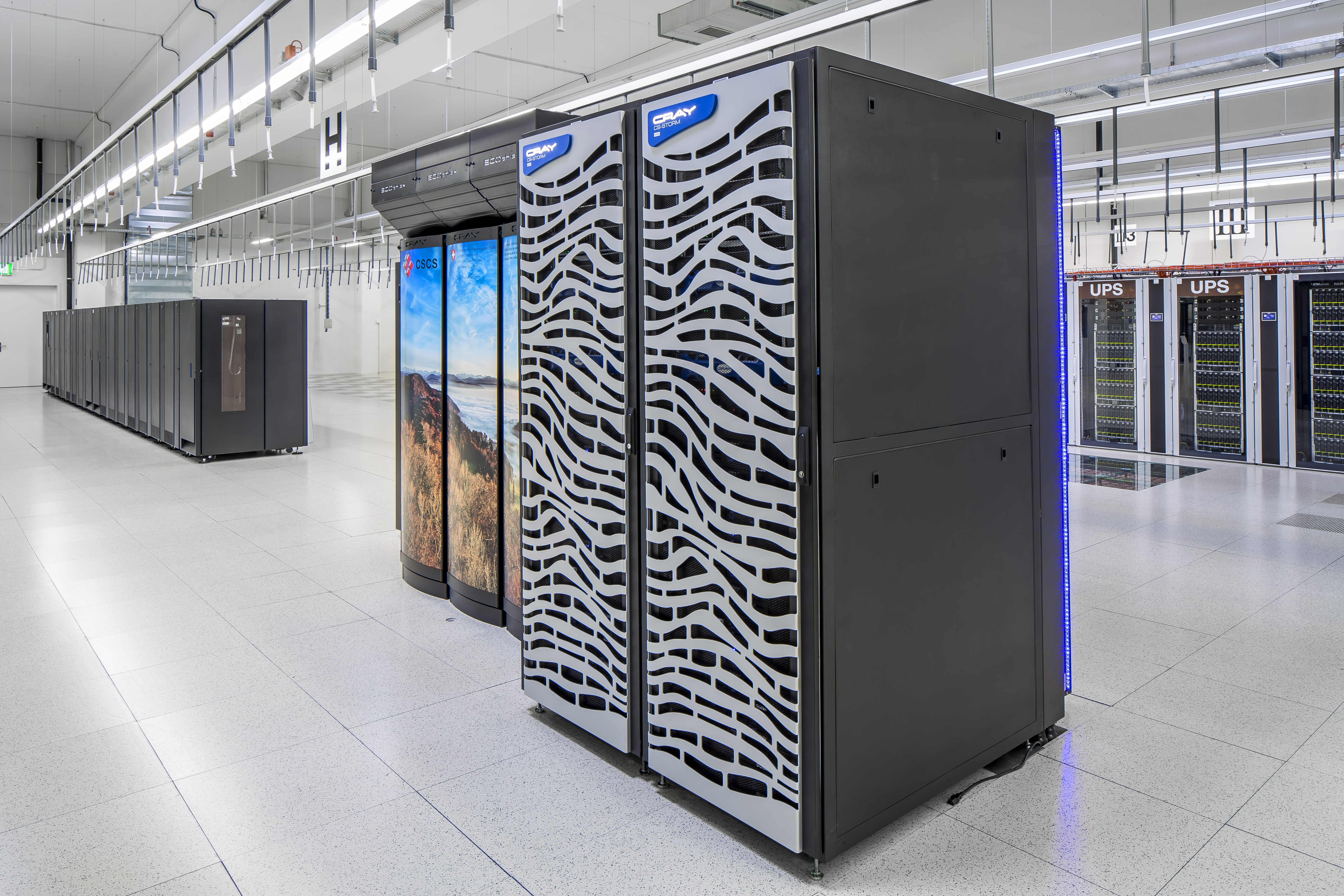 At the Swiss National Supercomputing Centre (CSCS) in Lugano the new “super weather computer” of the Swiss Federal Office of Meteorology and Climatology MeteoSwiss has started its operation. MeteoSwiss is the first meteorological service which has switched to a new GPU based computer architecture. Thus, the new supercomputer is able to calculate weather models with a resolution twice as high more efficiently and quicker than before.

Expectation in the Swiss national meteorological service continuously increase. To ensure air traffic safety, for warnings against severe weather, or in case of a nuclear or chemical accident, the weather simulations by MeteoSwiss are essential. Also individuals expect reliable weather forecasts for instance for mountain climbing, water sports or other activities where extreme weather conditions could pose a risk. Until now the weather models used by MeteoSwiss have only been able to predict local weather events such as storms or the Foehn effect across the Alpine region with limited accuracy. The granularity of the current 2.2-kilometre grid is insufficient to produce precise models of storm clouds as they are forming. To generate a more realistic simulation of this phenomenon, new higher-resolution weather models with a grid of 1.1 kilometres are required. Only a supercomputer that is 40 times more powerful than the current MeteoSwiss system running at CSCS could provide the required processing power.

MeteoSwiss worked closely with CSCS, the Center for Climate Systems Modeling (C2SM), the development partner Supercomputing Systems AG, the computer manufacturer Cray and the accelerated computing specialist NVIDIA to develop a powerful, yet cost-effective, compact and energy-efficient supercomputer. Due to a new system architecture and completely revised application software of the so-called COSMO model, it is now possible to produce the kind of state-of-the-art weather forecasts required. To guarantee more detailed weather forecasts, the simulation will be based on a grid spacing of 1.1 kilometres which runs recurrently every three hours. “This grid spacing makes it possible to predict with more detail the precipitation distribution, the risk of storms or valley wind systems in the Swiss mountains. It is an additional step to increase the utility of the weather forecasts” said Peter Binder, Director General of MeteoSwiss. In addition to these simulations, MeteoSwiss will run 21 twice-daily forecasts, each with a grid spacing of 2.2 kilometres but with slight variations in terms of basic conditions (ensembles). These 21 forecasts are compared with each other to better estimate the most likely weather conditions and possible meteorological developments up to five days into the future, thus allowing for a more detailed prediction of extreme weather events.

The two cabinets of the Cray CS-Storm supercomputer at CSCS are tightly packed. Each cabinet consists of 12 hybrid computing nodes for a total of 96 NVIDIA Tesla K80 GPU accelerators and 24 Intel Haswell CPUs. The GPUs are one of the key elements of the new computer system. They allow simulations which are three times more energy-efficient and twice as fast as conventional CPUs. “High-quality weather forecasts always depend upon processing power,” said CSCS Director Thomas Schulthess. “With the GPUs and the revised model, we can compute weather simulations more quickly and accurately than with conventional systems – and more energy and cost-efficient.”

MeteoSwiss is the first national meteorological service which has chosen a computer architecture based on GPUs for operational numerical weather prediction. “GPU-accelerated computing enables researchers and engineers to solve some of the world’s most difficult problems,” said Ian Buck, vice president of Accelerated Computing at NVIDIA. “The Tesla Accelerated Computing Platform is natural fit for weather prediction and other complex, large scale computational tasks that require massive amounts of computational horsepower.”

The Cray CS-Storm computer architecture, developed by Cray and CSCS for meteorological applications, further contributed to enhance the efficiency. “The ground-breaking use of the high-density GPU-based Cray CS-Storm system to run operational weather forecasts for the very first time is the direct result of the strong, collaborative partnership between CSCS, MeteoSwiss, NVIDIA and Cray,” said Barry Bolding, Cray’s Senior Vice President and Chief Strategy Officer. “With an eight-to-two ratio of GPUs to CPUs, the Cray CS-Storm system will provide MeteoSwiss with a powerful tool for running more detailed and higher-resolution weather forecasts.”

After a transitional period, the new system is expected to replace the current one by spring/summer 2016. Until then both systems will run in parallel for weather prediction in Switzerland.