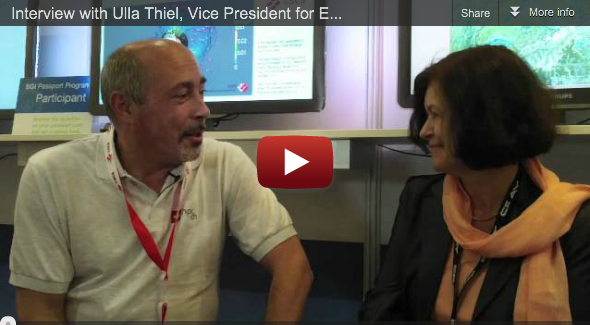 It was a great pleasure to have Dr. Ulla Thiel, Vice President Europe at Cray visit the hpc-ch booth at ISC12.

Ulla joined Cray in 2004 and currently serves as Vice President for Europe, the Middle East and Africa (EMEA). Ulla is in charge of Cray operations in Europe, which includes Sales and Marketing, Customer support and services, Research, Finance and Legal. From this position she has closely followed HPC developments in Switzerland for many years.

Cray has a strong relationship with Switzerland, and in particular with CSCS. In effect, CSCS became Cray’s first customer in Europe for their current MPP supercomputer product line, when, back in 2005, it deployed a Cray XT3, as one of the first Cray XT3 installations worldwide. This Cray supercomputer system has been upgraded several times since then, and is currently configured as a latest-generation Cray XE6.

Ulla appreciates the strong commitment of Switzerland to HPC, which is based on a long term strategy. In her opinion a very important element of this strategy is the HP2C program (High Performance and High Productivity Computing, www.hp2c.ch) where scientists, code developers and key supercomputer suppliers collaborate to develop new codes or to port existing codes to new architectures. This initiative could serve well as a model for other HPC programs.