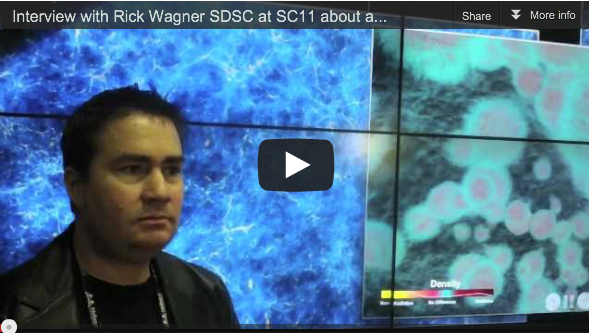 At the San Diego Supercomputing Centre (SDSC) booth at SC11 we met Rick Wagner who presented simulations of astrophysics that were done on Jaguar and Kraken at Oak Ridge National Laboratory.

In the simulation one could see the light of early galaxies that are forming (red shift of 8). The researchers simulated the birth of the first generation of stars in a galaxy and how their light starts to heat the gas around them, raising pressure and lowering density. This allows us to understand the impact on other stars formation and on the matter distribution of the universe. This is the first time that the results of such a simulation can be compare favorably with observations. The size of the simulation is 3200 grid cells on a side, cosmologically it has a volume of about 80 megaparsec.

“The light from early galaxies had a dramatic impact on the gasses filling the universe. This video highlights the spatial structure of the light’s effect, by comparing two simulations: one with a self-consistent radiation field (RHD), and one without (HD). The comparison shown is the relative difference of the temperature. The colors show whether the temperature is greater in radiative or non-radiative case.”

This research work is the result of a collaboration between SDSC for the scientific part and Argonne National Laboratory for the visualization. In two additional posts, we will focus on the visualizations aspects of this project. First we will share an interview with Joe Insley of Argonne, and afterwards  a video with Rick Wagner discussing with Venkartram Vishwanath of Argonne the challenges of displaying very large amounts of data.