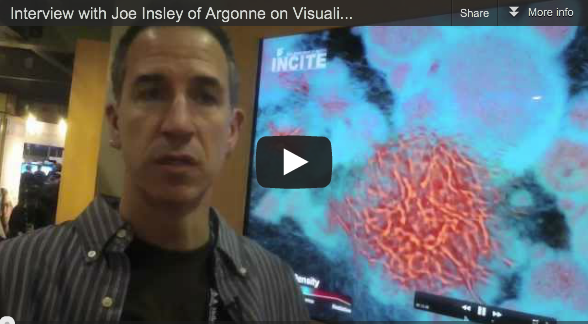 Joe Insley (Argonne National Lab) has been working together with Rick Wagner of SDSC (see previous interview) on the visualization of the spatial structure of the light emitted in early galaxies. The visualization compares variables from two different simulations.

To compare of the two different simulations visually, Joe used vl3, a hardware-accelerated volume rendering library and application developed at the University of Chicago and Argonne.

The visualization for smaller data sets can be rendered in real time on a half-dozen nodes with 20 frames per second. The visualization can also be streamed from Argonne to SDSC over a dedicated network using a software developed at Argonne, and is controlled through a web-based client