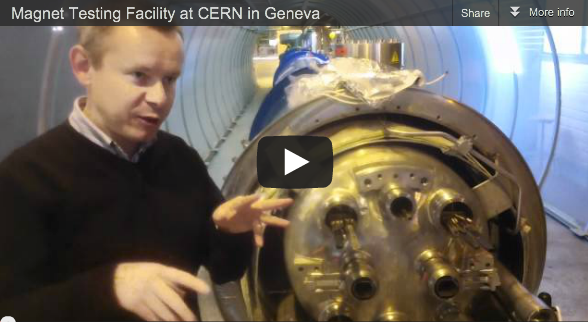 In the last weeks the international press was reporting about the first results in the search for the Higg particle at CERN. The infrastructure behind the the LHC experiment in Geneva is impressing in all respects. A large number of technicians and researchers is working around the clock assuring that the infrastructure is working.

In fact the infrastructure is not located only in Geneva but is scattered all around the world. A very powerful grid of supercomputers allows to analyze the huge amount of data being produced.

CSCS is also contributing to the experiment by running a Tier-2 cluster used by Swiss particle physicists. Last October we have been invited by our physicists colleagues to visit where the data we are analyzing is coming from. We visited CERN and in particular the control room for the ATLAS experiment and the facility used to test the magnets used to accelerate the particles.

In addition we have also visited the CMS monitoring/shifters room, the LHC monitoring room, the (formerly) Heavy Ions initial accelerator that is now the first circular accelerator after the linear one in the beginning, and the beginning of everything, where the small bottle of hydrogen is.

Since this is Christmas time, we decided to put almost the full length of our visit at CERN. The movies are only recommended to people really liking physics and technology and that do not get bored too quickly…

In the movies you will have the chance to see what is happening behind the scenes at CERN:

We would like Marc Goulette (ATLAS visit) and Szymon Gadomski (magnet testing facility visit) for their availability as all our colleagues at CHIPP supporting our work.

Enjoy and meet again next year on this blog.