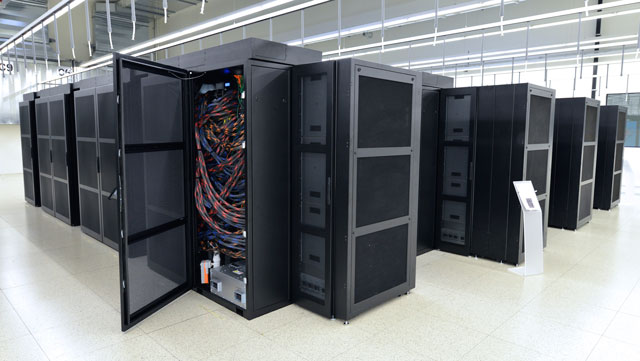 In May the Executive Board gave approval for the expansion of supercomputing at CSCS. The University of Zurich will contribute to the cost of one new computer. ETH Zurich is willing to allow all Swiss universities of applied science and other universities to hold considerable computing resources at CSCS.

Whether it is a question of modelling climate change or simulating trends in financial markets, many problems which would take months to process without a supercomputer, or to which it would be impossible to find a solution, can be solved in just a few days by using a supercomputer. CSCS is a service and research unit of ETH Zurich based in Lugano which provides technical and scientific services for the Swiss research community in the form of high-performance computing (HPC).

In order to offer even more computing resources for users, at the beginning of 2014 CSCS decided to expand its existing facilities with the purchase of a Cray supercomputer (multi-core Cray XC40). “This is an addition to our existing Cray XC platform, which we have called Piz Dora,” says CSCS media spokesperson Angela Detjen. Piz Dora has a maximum capability of 1,258 petaflops – a petaflop is the equivalent of 1,000,000,000,000,000 (a quadrillion) calculations per second.

“This further strengthens the cooperation between ETH Zurich and the University of Zurich,” says Roman Boutellier, Vice-President for Human Resources and Infrastructure at ETH Zurich. “Thanks to their involvement, we can spread our fixed costs across a larger volume of calculations, while the University of Zurich will not have to invest so much in expensive infrastructure itself. It is possible that we could also enter into partnerships with other universities and universities of applied science.”

Research groups at the University of Zurich have represented one of the largest user groups of the CSCS computer systems for several years. However, they had to apply for access to the systems, and computing time was assigned by competition and only to the best projects. “The most successful applicants and therefore regular users of CSCS include research groups from the departments of Physics, Astrophysics, Chemistry, Biochemistry and Mathematics at the University of Zurich. There is also one research group from the department of Anthropology – their project consists of simulating the migration models of Neanderthals,” says Daniel Wyler.

Replacing the local Schrödinger system with a system at CSCS will lower the threshold for submitting new algorithms for the competitive supercomputers at CSCS, and less data will need to be sent between Zurich and Lugano.

As a result of the growing requirement for calculations, data analysis and simulation in research and science, in January the University of Zurich set up a department called Services and Support for Science IT, or S3IT for short. This supports researchers from all faculties with using supercomputers and data management, and is intended to help ensure that research at the University of Zurich remains internationally competitive. “Our experts at S3IT are already working closely with the experts at CSCS. They are testing the new system to make sure that it can be made available to researchers on time at the start of next year,” says Daniel Wyler. “If the tests are successful, then soon all today’s Schrödinger users will be able to do their computing directly at CSCS.”

At CSCS, they have been working since early November to prepare the necessary working environment and they have already authorised the system for trial use. “From January 2015, the system will be made available to a wider group of users,” says CSCS spokesperson Angela Detjen. The system is scheduled to go into full normal production from 1 April.

In addition to the University of Zurich, EPFL has also been involved with Piz Dora, with its National Centre of Competence: Marvel – Materials’ Revolution: Computational Design and Discovery of Novel Materials.