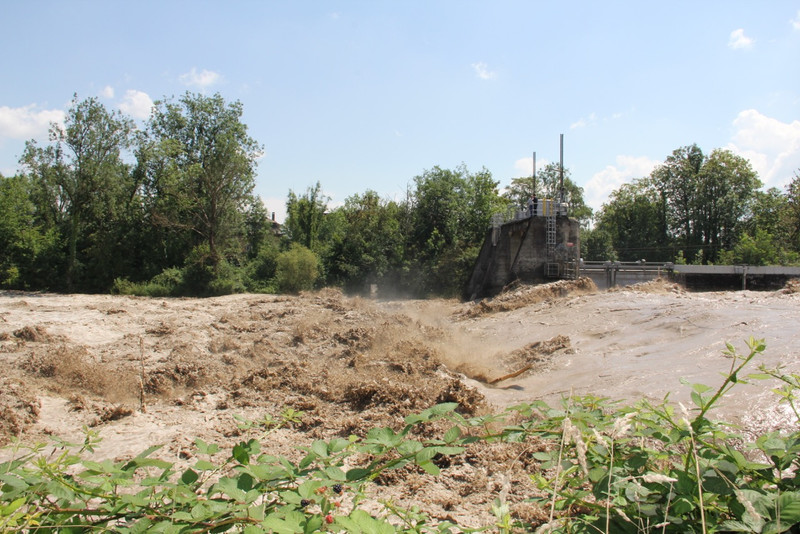 Hail, thunderstorms and heavy rainfall. These extreme events are supposedly on the increase in the course of global warming. High-resolution simulations conducted by ETH Zurich researchers on CSCS’s supercomputers now add more certainty to the projections.

Summers in Switzerland and Europe should become drier in future. At the same time, extreme rainfall is supposed to become more frequent and intense. At least that’s what climate models seem to suggest. They indicate that heavy rainfall is on the increase in the Alpine region. There is an ongoing debate over how dramatically heavy summer showers, including thunderstorms, which only last for a few hours could increase. Until now, there have hardly been any quantitative scenarios as conventional climate models with a grid spacing of 25 to 200 kilometres are unable to represent the crucial small-scale thunderstorms sufficiently.

A team of researchers from the Institute for Atmospheric and Climate Science at ETH Zurich has now come up with quantitative scenarios using unusually high-resolution climate simulations on the supercomputers of CSCS (Swiss National Supercomputing Centre). However, these simulations also take around one and a half years of computation time. Nevertheless, as heavy showers and thunderstorms have the potential to cause a lot of damage, such scenarios are important to plan precautionary measures against floods or landslides, for instance.

As known from previous studies, climate change significantly alters heavy rainfall for periods of 50 to 100 years ahead. Although the processes responsible are highly complex, the emerging change fits with a simple physical equation, which describes the increase in humidity in a warming atmosphere. As a result, climate scientists expect heavy rainfall to follow this so-called Clausius-Clapeyron relation and thus the intensity of extreme day-long events to increase by six to seven per cent for every degree Celsius that the climate warms up. More recent studies, however, indicate that the intensity of heavy showers could raise at twice this rate.

Nonetheless, the results of the simulations in the current ETH Zurich study coincide surprisingly well with the Clausius-Clapeyron relation. For Nikolina Ban, the first author on the study, the fact that the simulations are virtually congruent with the precipitation data measured for the current climate boosts the confidence in both her model and the Clausius-Clapeyron relation.

In her doctoral thesis, Ban focuses on simulations with such a high resolution that they display convective (thundery) cloud formation based on the governing physical laws. To prevent the cloud-forming processes from “falling” through the computational mesh, which determines the calculation points for the simulation, the grid spacing must be smaller than a few kilometres. By choosing a short grid spacing of 2.2 kilometres, the researchers were able to represent thunderstorm clouds and rainfall without using simplifying assumptions. The fact that the actual atmospheric processes are adequately represented, reduce uncertainties and boosts the researchers’ confidence in the model. At the same time, however, this means time-consuming, costly calculations, as the basic physical equations need to be solved at every grid point.

Using the high-resolution simulation, the scientists covered the extended Alpine region from Northern Italy to Northern Germany (an area of 1,100 by 1,100 kilometres) for a period of ten years. “This is the first high-resolution simulation on such a large geographic scale and with such a long simulation period,” explains Ban proudly. The researchers performed three simulations in all: one for the past to check it against the data gathered in precipitation measurements, and two more for the present and future climate. Although it takes four to eight months to calculate a simulation, for the researchers it was well worth the effort and Christoph Schär is over the moon: “With the high resolution, we achieved a leap forward in modelling like I’d never seen before in my long research career.”

Heavy rainfall despite a trend to dryer conditions

Nonetheless, the model provides the scientists with further indications of the future climate. For instance, they conclude from the results of the simulations that the expected intensification of the precipitation follows Clausius-Clapeyron’s physical equation, and that an even greater (superadiabatic) intensification is not on the cards. Confusingly, these so-called superadiabatic effects can be seen both in the observations and within the individual simulations. According to the researchers, however, this additional increase does not influence the long-term climate development or, therefore, the adjustment strategies to climate change, as the effect is offset by a decrease in rainy days in the course of climate change. Consequently, for the researchers, the results also reveal that present-day observations and precipitation conditions cannot be extrapolated into the future as easily.