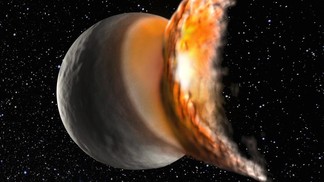 Models boost the significance of image and measurement data from space missions and help to understand our solar system. A simulation of a double impact that occurred on the proto-planet Vesta one billion years ago allowed scientists to describe precisely the inner structure of the asteroid. A joint research from EPFL, Bern University, France and the United States is on the cover of Nature this week.

Tomorroy, on February 15th, a 45-meter asteroid dubbed 2012 DA14 will draw the attention of the scientific community, since it will fly very close to the earth – even below the geosynchronous orbit that hosts thousands of satellites. Hopefully without harm, and it will soon be forgotten.

But for the longer-term studies, Asteroid Vesta is a kind of movie star for planetologists. With 500 km in diameter, it is one of the three largest objects of the asteroid belt that formed simultaneously to the solar system we live in, four billion years ago. It is considered a “protoplanet” or a precursor of a planet. Moreover, it is the only known asteroid to have an earth-like structure – with a core, mantle and crust.

Computer simulation reconstructs collisions between asteroids
Using a three-dimensional computer simulation, Martin Jutzi from the Center for Space and Habitability (CSH) at the University of Bern has now accurately reconstructed how Vesta collided with other asteroids twice over a billion years ago. The models show that the protoplanet owes its elliptical shape to these collisions and that they also scarred its surface structure. They are presented in a study published today on the front page of Nature magazine.

The simulations also enable detailed conclusions on the composition and properties of Vesta’s interior to be drawn for the first time, which helps us to better understand the evolution of the solar system. «Based on the sort and distribution of this material at the surface of the asteroid, we are able to precisely reconstruct the various inner layers of Vesta down to a depth of 100 km», explains Philippe Gillet, head of EPFL’s Earth and Planetary Science Laboratory.

Models uncover hidden secrets
Previously, observations with the Hubble Space Telescope provided initial evidence of a giant crater at Vesta’s south pole. Then, in 2007, NASA’s «Dawn» probe began its space voyage into the solar system’s past. Starting in the summer of 2011, it closely orbited Vesta for one year. Images from within the visible range as well as other measurement data provided information on the asteroid’s topography and the composition of the minerals that are visible on its surface. It became apparent that the crater observed by Hubble at Vesta’s south pole is actually composed of two partially overlapping basins.

Based on this information, the computer simulations demontrarte exactly how two consecutive impacts of celestial bodies led to the formation of the observed overlapping basins, which almost span the entire southern hemisphere of Vesta. The models show the size (66 and 64 kilometres in diameter), velocity (5.4 kilometres per second) and the impact angle of the bodies that collided with Vesta. This reveals a lot about the properties of the objects that were near the protoplanet a billion years ago.

The final images of the simulations closely resemble the shape and topography of Vesta’s southern hemisphere as observed by the Dawn mission. The models even accurately reproduce the spiral-shaped structures inside the youngest crater which are visible on images from the Dawn mission. «This shows how reliable our method is», rejoices Jutzi. “It also proves that the method we used to determine the composition of Vesta’s inner layers are accurate, adds Gillet. The simulation does show that some of the debris were ejected from a depth of 100 kilometers.”

«The fact that we can now look inside such protoplanets makes entirely new perspectives in the research on the history of our solar system possible,» says Jutzi.