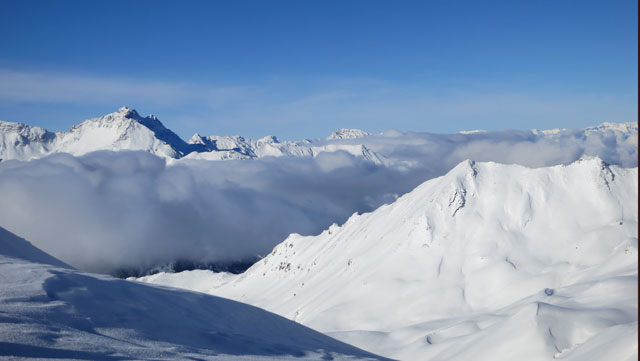 As simulations conducted by climate researchers from the University of Bern and the Oeschger Centre reveal, the precipitation during the last ice age came from the Mediterranean. Therefore, the glaciers in the Alps presumably began to grow from the south. This is due to a shift in the jet stream towards the equator.

Nowadays, the Azores High and Icelandic Low determine the weather in Europe: in winter, they pave the way for cold and snow in the polar air from the north. In a glacial period where North America is covered with a thick ice sheet, however, the jet stream above the Atlantic clearly seems to shift southwards, as simulations conducted on the CSCS supercomputers by researchers from the University of Bern reveal. The team presented their latest results at the European Geological Union Conference in Vienna in mid-April.

The Bernese researchers had already studied how the atmospheric dynamics in the North Atlantic and the precipitation conditions over Europe change under different glacial conditions back in 2012. The study was co-funded by the Swiss Federal Nuclear Safety Inspectorate as precipitation enables glaciers to grow during glacial periods. The glaciers can scoop out the bedrock to depths of a few hundred metres in the process. Consequently, the aim is to avoid placing permanent repository sites, which are supposed to seal off radioactive waste from the environment for a million years, in regions where particularly thick glaciers could form. The simulations suggest that the precipitation which fed the glaciers primarily came from the south, as geological findings had previously indicated.

In a new study, the scientists have now managed to simulate the jet stream’s behaviour during glacial and interglacial periods and analyse it more accurately thanks to a new method that is able to display the jet stream’s fluctuations during the winter months with greater precision. The team simulated the last glacial maximum around 21,000 years ago, as well as less extreme glacial period 65,000 years ago.

The researchers had already factored how different thicknesses of the Laurentide Ice Sheet, which covered North America and Greenland in the last glacial period, into their simulations in 2012. Moreover, other external forcing factors such as the solar radiation due to the earth’s orbital parameters, the greenhouse gas concentrations, and the surface temperature and sea ice distribution were channelled into the simulations. As in 2012, the simulations revealed that the thickness of the Laurentide Ice Sheet primarily controls the jet stream over the Atlantic as the ice sheet disturbs the jet stream’s waves the thicker it becomes. As a result of this interference, the jet stream is shifted southwards.

“Nowadays, the position of the jet stream in the winter follows a trimodal distribution, which means it is located either northward, central or southward over a broad range,” explains climate scientist Christoph Raible. This behaviour was underestimated in model simulations using previous methods. Once the researchers succeeded in simulating this behaviour more accurately, it became apparent that the distribution was – and still is – very stable in the past interglacial periods studied and is therefore typical for the winter months of the interglacial with slight deviations.

During the glacial periods, however, the jet stream shifts southwards towards the equator. As a result, its behaviour is described as unimodal, which causes the jet stream to become stronger and faster at a latitude of 38 to 40 degrees north. This increase in intensity is also favoured by short-lived synoptic interferences (high and low-pressure systems). “Although these are also caused by the jet stream, part of their energy is released back into the jet stream over the south-eastern Atlantic and the Mediterranean,” says Raible. The new simulations also confirm that the thickness of the Laurentide Ice Sheet is mainly responsible and the change in the position of the jet stream in the glacial period’s winter months triggered more precipitation on the southern face of the Alps. The reason for this is that low-pressure systems, which are primarily found over the north-eastern area of Europe today, moved over the Mediterranean in the glacial period, as Raible explains. For the researchers, the discovery reinforces the geological evidence that the alpine ice sheet grew from the south in the last glacial period.