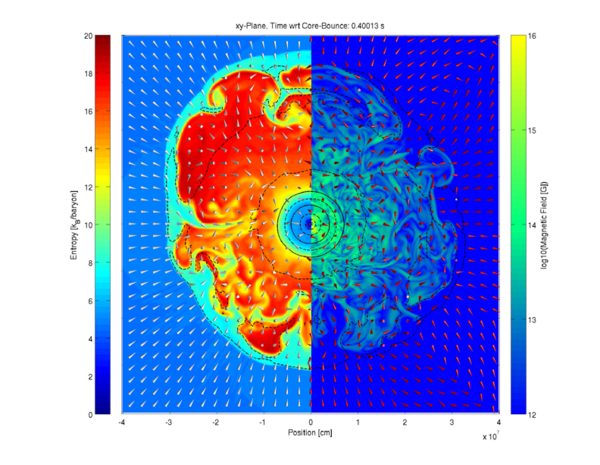 Supernovae are exploding stars. The light from the explosion and its remnants enable numerous conclusions to be drawn about the former star. To this day, however, it has not been possible to explain how these stellar explosions come about. Astrophysicist Matthias Liebendörfer from the University of Basel and his colleagues are getting to the bottom of it with the aid of supercomputers at CSCS.

At the end of their “lives” stars shine brighter than ever before: during their explosion their luminosity is a million or billion times more intense. This event, referred to as a supernova, can be observed for up to 100 days with telescopes in space and on Earth. If a supernova occurs in our galaxy, such as the famous Kepler’s Star of 1604, it can even be seen with the naked eye in good visibility.

At least two mechanisms can cause a star to become a supernova. The mechanisms leave behind different end products and are based on the star’s initial mass: in the case of a large mass, a black hole can form through the collapse of the star’s core. If the initial mass is lower but at least eight times higher than that of our sun, a neutron star is formed. Matthias Liebendörfer, a lecturer in astrophysics at the University of Basel, primarily focuses on the supernova mechanism that is triggered by a core collapse and leaves a neutron star behind. When it comes to evaluating the various theories, the only tool researchers like Liebendörfer have at their disposal is simulating the process on high-performance computers. He uses the supercomputers at the Swiss National Supercomputing Centre (CSCS).

Back in 1938, Swiss physicist and astronomer Fritz Zwicky was the first to suggest that the energy for a supernova explosion might come from the gravitational collapse of a star. As we know today, the chemical elements of a star pass through a chain of nuclear fusions during their “lifetime”, which spans several tens of millions of years. This fusion chain only stops when elements from the iron family are formed. With the most binding energy per nucleon, iron is the final link in the fusion chain. For another fusion to take place, energy would need to be added. Instead, iron now accumulates in the star’s core until the latter becomes unstable and collapses as it is no longer able to counter the gravitational forces at work.

Contrary to their natural state, the negatively charged electrons are compressed in such a way during the collapse in the star’s core that the positively charged protons can capture them. As a result, neutrons form through the release of neutrinos.

As neutrinos only interact weakly, they can diffuse the high density generated by the compression from the core and ultimately stream out of the core. This “neutrino shower” can be detected in our galaxy with special measuring devices and interpreted as an indication of a pending supernova. The first time this was achieved successfully was for the supernova in the Magellanic Cloud in 1987: the neutrino shower observed and the disappearance of the progenitor star provided the researchers with a strong indication that the collapse theory was correct.

It is apparent that under certain conditions following a star’s collapse, the neutrons remaining in the core will form a neutron star, with a diameter of about twenty kilometres, and a mass equivalent to about 1.4 suns. Exactly which physical mechanisms ultimately trigger the stellar explosion after the core collapse, however, remains unclear to this day. Firstly, the strong interaction between the atomic nucleuses in the star cause the collapse of the innermost shells to suddenly stop as soon as a certain extremely high material density has been reached, explains Liebendörfer. The enormous forces exerted in the process trigger a shockwave that propagates itself towards the exterior through the rest of the star. As it spreads, it interacts with the layers it penetrates and exchanges energy.

On the way, the shockwave also triggers a so-called nucleosynthesis, where new elements form, including ones that are heavier than iron, such as germanium, gold or uranium. The newly-formed elements are initially in an excited – energetically higher – state and return to their ground state gradually through radioactive decay. In the process, the material is heated up and emits light. These light spectra provide an indication of the development of the supernova and its remnants, an emission nebula made of gas, dust and the outer, exploded layers of the star. “Based on these light spectra and the materials ejected from the exploding star, a kind of velocity map of the ejecta can be produced and the elements that form during nucleosynthesis determined,” says Liebendörfer. Although the explosion process is undisputed, it remains unclear via which physical mechanisms the shockwave gains sufficient energy to explain the observed nucleosynthesis that takes place in the jettisoned external layers.

Astrophysicists have enlisted the aid of computer simulations to reconstruct supernova explosions since the late 1960s. They initially attempted to reconstruct the explosion mechanism based on spherical, shell-like models. Scientists calculated hundreds of shells and observed the impact of one shell on another, explains Liebendörfer. Nonetheless, they failed to create an intrinsically consistent explosion: “When a simulation seemingly produced the result that had been hoped for, the models used always failed to physically pan out,” says the astrophysicist.

Around the turn of the millennium, physicists had models at their disposal that they believed displayed the most important physical and relativistic processes, including neutrino transportation through the star. According to Liebendörfer, however, the simulations only ever ended in a black hole, never in a neutron star formation. They then realised that a key process had not been factored into the models, namely multidimensional upheavals such as convections or turbulences. This work was followed by the introduction of very elaborate two-dimensional models, he says. The fact that the cause of the explosion could still not be explained unequivocally was due to the enormous computer resources that were necessary for a realistic simulation, but also the extreme physical conditions that prevail in a supernova.

Together with scientists from the University of Geneva, Liebendörfer and his colleagues have spent the last few years developing a three-dimensional model to simulate a supernova in the project High Performance and High Productivity Computing (HP2C). Thanks to this effort, it is now possible to consider processes that require three dimensions, such as the detailed development of convection and the magnetic field. This should now enable the stellar explosions to be modelled more realistically.

However, Liebendörfer remains cautiously optimistic. The model still needs to be put through its paces to see whether what it calculates is actually correct. One of the most difficult processes to model is the transportation of neutrinos through the core and star, which scatter at high densities and flow at lower densities. The researchers needed to devise new algorithms here as the earlier ones would be far too computationally demanding for use in multi-dimensional space. Consequently, the scientists identified the most essential processes for every phase of a supernova and incorporated them into the model. In this way they can calculate the key aspects of the respective phases in the simulation of the collapse or spread of the shockwaves and omit the less important processes.

“The new method already works extremely well for one and two-dimensional models,” says a delighted Liebendörfer. In the follow-up project, the Platform for Advanced Scientific Computing (PASC), the neutrino model will be made accessible for all researchers as a radiation transport library, produced in collaboration with scientists from the University of Zurich.

However, it might be some time before a supernova can be reconstructed successfully in the three-dimensional model. The astrophysicist points out how many decades and painstaking theoretical work it took to get to the present state of research. But if the scientific community does not succeed in producing a realistic and physically credible supernova with the three-dimensional model on the supercomputer after extensive testing, we will know for sure that something is fundamentally wrong with the model, says the scientist. Nevertheless, for him, the ability to show that standard physics does not describe correctly the extreme conditions of a supernova that are unattainable on Earth would be just as exciting as a definitive understanding of the supernova explosion with the physics we know.