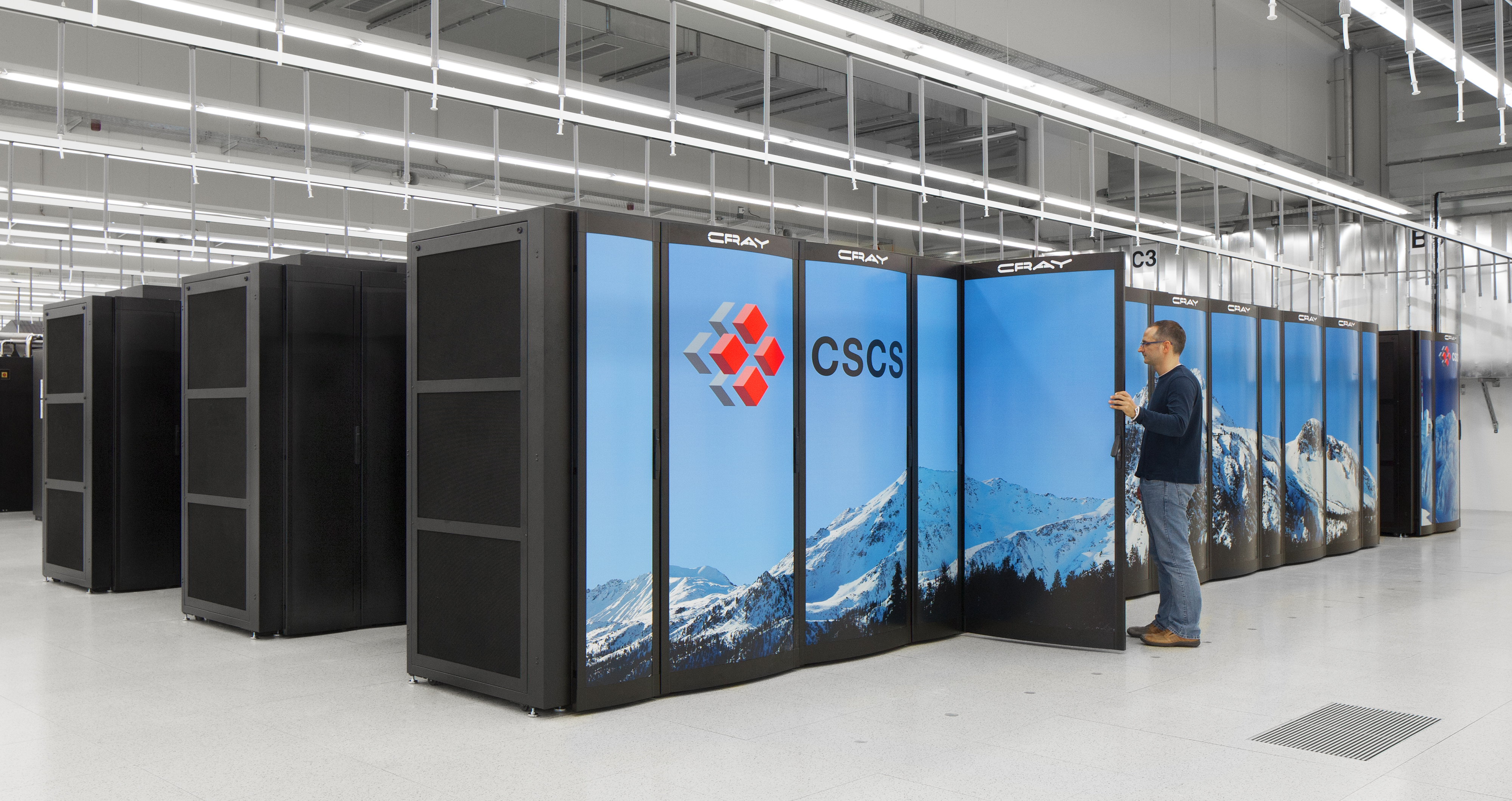 “Piz Daint”, in operation at CSCS since April 2013, has gone through a major upgrade. During the last few weeks the supercomputer based on Intel Xeon E5 processors has more than doubled in system size from 12 to 28 cabinets and has been upgraded to a hybrid architecture featuring NVIDIA® Tesla® K20X graphical processing units (GPUs). With a total of 5’272 hybrid compute nodes as well as a powerful high-bandwidth, low-latency network, it will now be possible for real simulations to sustain petaflops (1015 floating point operations per seconds) performance.

Compared to its predecessor, the Cray XE6 “Monte Rosa”, “Piz Daint” provides up to 20 times more compute performance while using only up to two and half times as much electrical power. Regional climate simulations based a new implementation on the hybrid system of the COSMO model for example use seven times less energy to solution on “Piz Daint” compared to current simulations on “Monte Rosa”. This improvement is possible thanks to the hybrid architecture, a combination of CPUs and energy-efficient GPUs.

This upgrade will enable researchers and scientists to study more detailed, higher-resolution models in less time. The new computing capacity of “Piz Daint” will be made available through the regular CSCS user program. Furthermore, CSCS has recently issued the first call for CHRONOS proposals as a vehicle to allocate large computational resources on “Piz Daint” to world-class research projects. CHRONOS calls will be annually opened to researchers in all fields of science, from both national and international research institutions and universities alike.

With the upgrade of “Piz Daint”, CSCS has implemented the final step of the Swiss High Performance Computing and Networking (HPCN) initiative coordinated by ETH Board. The HPCN-strategy started in 2009 with the goal of providing the Swiss research community with a petaflop-scale supercomputer.

Thomas Schulthess, Director of CSCS, is very proud of this important achievement, “For the first time at CSCS, a new supercomputing system has been co-designed along with key scientific application codes. Building the hybrid “Piz Daint” supercomputer in such a short time was only possible thanks to an excellent collaboration with Cray, NVIDIA, and application scientists at Swiss universities”.

“Piz Daint” will be fully integrated into the CSCS user program in April 2014, with the start of the new allocation period.