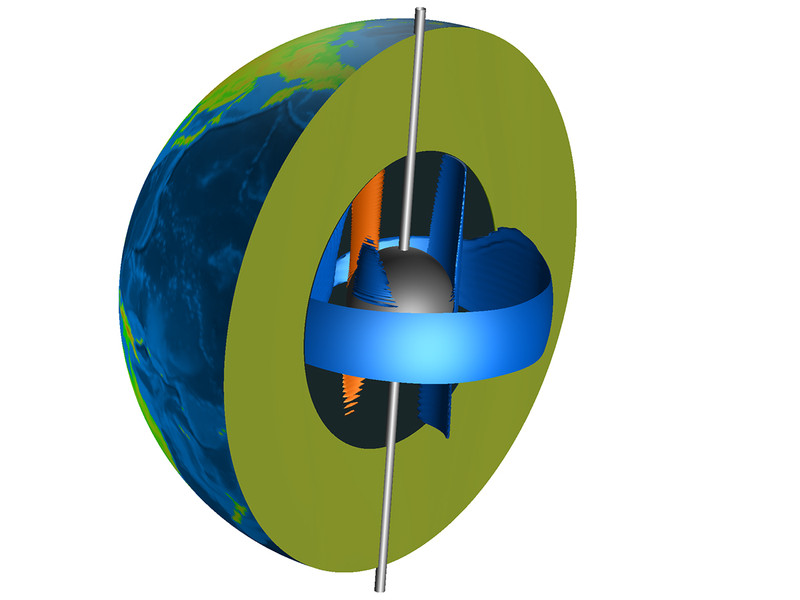 For 300 years we have known that the Earth’s magnetic field moves gradually westward. Computer simulations on the CSCS super-computer “Monte Rosa” by researchers at ETH Zurich and the University of Leeds explain why this happens.

The Earth’s magnetic field surrounding our globe protects the Earth from harmful radiation and helps animals like birds or bats to get their bearings. The Earth’s magnetic field is mainly generated by the so-called geodynamo processes in the liquid outer core and in the solid inner core. Philip Livermore from the University of Leeds along with Rainer Hollerbach and Andrew Jackson from ETH Zurich have now demonstrated for the first time, using computer simulations on the CSCS super-computer “Monte Rosa”, that the magnetic field in turn influences these dynamic processes in the Earth’s core. Hence, the magnetic field leads to the solid inner core – which is about the size of the moon – rotating in an easterly direction and the outer core fluid and magnetic field being pushed westward. The latter was already observed back in 1692 by the discoverer of Halley’s comet, the natural scientist Edmund Halley, but could not be explained up to now.

Thrust to the east and west

The scientists used new methods for their simulation and worked in particular with a viscosity that was two orders of magnitude lower and thus 100 times closer to reality than in previous models. The scientists said that this was how they had succeeded in achieving correspondingly higher resolutions of certain physical processes in the Earth’s core. The simulations show that the force of the Earth’s magnetic field in the outermost region of the liquid core drives the magnetic field westwards. At the same time, these very forces give the solid inner core a thrust towards the east. This leads to Earth’s inner core having a higher rotation speed than the Earth.

Based on their study the researchers came to the conclusion that even subtle changes in the Earth’s inner magnetic field can lead to the respective directions of movement being reversed. This, in turn, explains the observation that over the last 3,000 years the Earth’s magnetic field has shifted on several occasions eastward instead of westward. It was likely that the Earth’s inner core then rotated in a westerly direction, instead of eastwards. According to the researchers even the smallest changes in the magnetic field could have led to different rotation speeds of the inner core. The research team of Hrvoje Tkalcic at the Australian National University recently made just such an observation of spin rate fluctuations over the last 50 years

Numerical models of the Earth’s magnetic field rank among the most computer-intensive simulations in high performance computing. In the simulations systems of equations governing fluid dynamics, classical mechanics and thermodynamics have to be solved. Together with seismic measurements, such simulations are the only tool for researching the Earth’s interior from depths of 2,900 kilometres all the way to the Earth’s centre at a depth of 6,378 kilometres. In recent decades studies of this kind have made enormous contributions to understanding what happens in the Earth’s interior.