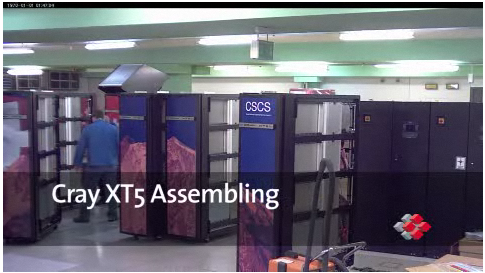 In June of 2009 Monte Rosa was inaugurated at CSCS. During the last year Rosa has been working day and night providing cycles to the Swiss researcher community. In this year the number of cores used by the jobs increased rapidly: 57% of the jobs use now more than 512 cores and 33% of the jobs use even more than 2048 cores (status first quarter 2010). 24% of the users are from fluid dynamics and 23% are from physics, followed by nanoscience (12%), earth and environmental sciences (11%) and chemistry (8%).

We created a movie showing the assembly of Monte Rosa, if you want to have a look click on the image here below.