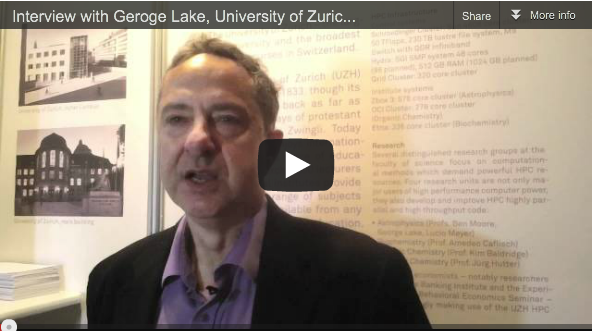 George Lake is professor for astrophysics at the University of Zurich (UZH). At his visit to the hpc-ch booth at SC11 we interviewed him about his research activities. George told us that at UZH there are different research groups working on dark matter, large scale structure of the universe and galaxy and clusters of galaxies. Most of the matter in the universe is dark matter, a mysterious component we still do not understand but it drives the process of galaxies formation and evolution. The researchers at UZH recently discovered that dark matter is clustered in little lumps that are present even in the disk of our galaxy. Currently they are studying both novel observational approaches to detect these lumps and their theoretical consequences on the process of galaxy and galaxy cluster formation.

For many years George has been involved in supercomputing . He was first one of the leading scientists for a large NASA program, HPCC/ESS (High Performance Computing and Communications for Earth and Space Sciences), then he was chief scientist at the ARSC supercomputing center.  The NASA was the one where Tom Sterling initiated the Beowulf cluster project. Originally the Beowulf was a gigaflop workstation. The idea was to create a personal supercomputer setup on your desk. George was the first to say “workstations heck, I’m building a server”.

George also boosted the research and supercomputing environment in Switzerland. The general envornment in Switzerland has very balanced investments. We have a national supercomputing centre in Manno (Ticino)  and the university has an own cluster. There are good investments in research groups to develop next generation software to use next generation systems (HP2C initiative). It is a confluence of things that the US is tried to achieve for many years and the Swiss have accomplished.