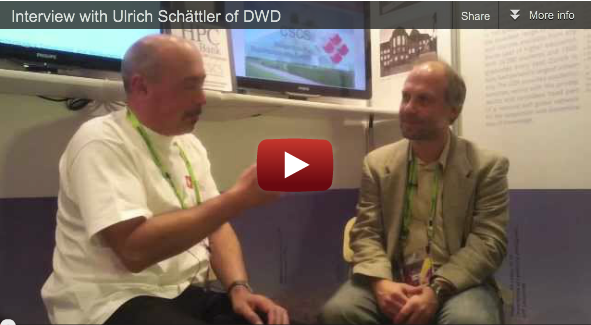 Ulrich Schättler is working for Germany’s National Meteorological Service, the Deutscher Wetterdienst (DWD). He started at DWD as software engineer. Years ago he has been asked to parallelize the weather forecast model on distributed memory computers. Since then he is getting involved in weather forecasting and operational forecasting. In his actual function he is responsible to produce day by day the weather forecasts and to give support to the users.

The model used by DWD is named COSMO and is the same being used in Switzerland and other countries in Europe and worldwide. COSMO has been developed in the late 90thies as a non hydrostatic regional model. COSMO is not only being used by weather services but also by the academia for research and to teach and train students . DWD and Ueli Schättler are also involved in the Swiss HP2C project aimed to port COSMO to next generation HPC platforms.

At this place we would also like to remember you about the Colloquium at MeteoSwiss on How much HPC does meteorology need? planned for tomorrow, Tuesday, November 29th.