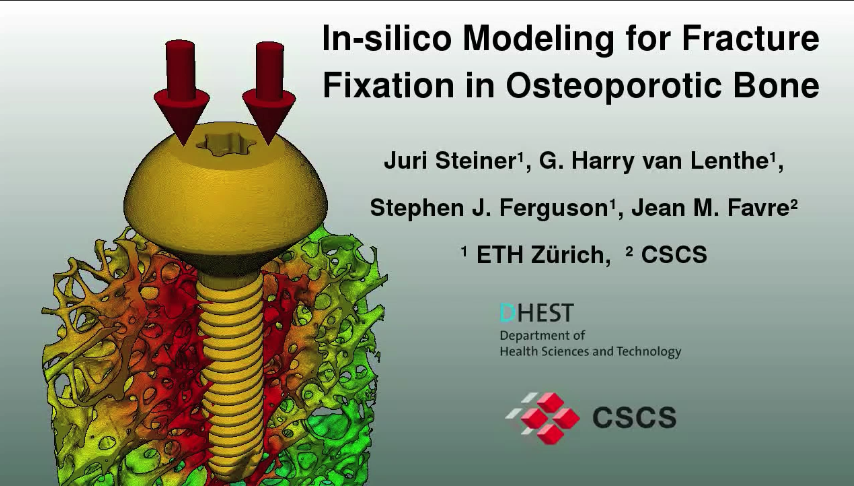 Osteoporosis has become more prevalent in our aging population, making fracture treatment more difficult because of an impaired peri-implant bone microstructural quality. Biomechanical tests are usually conducted to investigate the mechanical bone-screw competence. However, in vitro mechanical testing is expensive and time consuming because human bone material is sparse and shows a high variability. Alternatively, computational specimen-specific models make it possible to run different mechanical tests on the same specimen. A micro-CT based Finite Element (µFE) Analysis is used to investigate the mechanical competence of bone-screw models in silico. A cylindrical trabecular bone specimen is instrumented with a titanium screw and scanned using micro-computed tomography at a nominal isotropic resolution of 20 µm. µFE models were created for two cases: a two-component bone-screw model, and a three-component model including a soft interface layer (10 voxels thick). Youngs moduli for bone tissue, soft layer and titanium screw were 10 GPa, 2 GPa and 100 GPa, respectively. The models were solved using the parallel solver ParaSol, running with 384 parallel tasks for a model of 142 million hexahedral cells. Visualization was performed with a ParaView server with 64 tasks. The resulting force was 31% lower in model 2 compared to model 1. In model 2, high displacements occur only in the vicinity of the implant, better mimicking the deformation pattern of in vitro bone-screw constructs. Acknowledgements This work was funded by the Swiss Commission for Technology and Innovation (CTI 14067.1 PFLS-LS) and by Synthes, Solothurn, Switzerland.