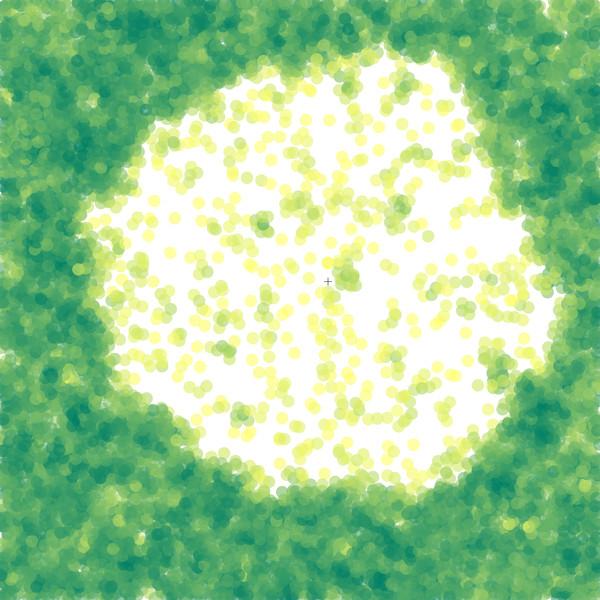 Supercomputers help researchers where experimentation and observation reach their limits. Physicists Jürg Diemand and Raymond Angélil from the University of Zurich use them to detect flaws in theoretical models of phase transitions, for instance.

When water molecules evaporate from a liquid phase into a gaseous phase, they alter their aggregate state. The mathematical description of such a phase transition harbours pitfalls as nucleation is needed for the change to take place. The theory behind this, classical nucleation theory (CNT), however, is deemed highly inaccurate. Earlier studies suggest that the rate of the bubble nucleation determined with the CNT is underestimated. The research team headed by physicist Jürg Diemand, a professor at the University of Zurich, enlisted the aid of the CSCS supercomputers to scrutinise the process in which liquid vaporises. They revealed that, to some extent, the theory actually reflects the reality. The nucleation theory only underestimates the formation rate of the gas bubbles at very low temperatures. The simulations also gave the researchers an insight into possible causes of the deviations.

A “black box” in science

Shedding light into the darkness of the “black box” of phase transition, where a previously stable substance becomes metastable in order to transform into a new stable form, is relevant for many research fields. This is because similar things occur when clouds form or dust particles condense out of gas develop in the cosmos. Although, according to Diemand, theoretical physics describes the states of equilibrium and the macroscopic objects very well with thermodynamics, the central processes in a phase transition take place on a much smaller nanometre scale. One nanometre is one billionth of a metre. On account of their size, nanoparticles can possess completely different properties and functionalities to their macroscopic siblings.

In their study, the scientists under Diemand examined the issue of why the CNT is often inaccurate and how the assumptions in the model differ from the actual properties of the gas bubbles. In their study, the scientists succeeded in simulating such molecularly dynamic processes directly for the first time – “brute force” – rather than approximately. In order to illustrate the conditions realistically, the simulated volume selected was as large as possible, with half a billion particles. “This is only possible if you have an enormous computer capacity and efficiently programmed codes at your disposal, which can share the work among individual calculation cores virtually loss-free,” says Diemand. Under these conditions, several stable gas bubbles formed during the simulation, without the temperature or pressure in the simulated system changing significantly as a result. The researchers were also able to determine the gas bubbles’ formation rate.

No congruence at low temperatures

By comparing their simulations with the CNT, the researchers are not only able to verify the theory, but also detect any flaws and ultimately initiate improvements. Many researchers have spent years working on improving the CNT. For Diemand and his team, the new study indicates that the surface tension of the tiny, young gas bubbles behaves very differently to that of macroscopic bubbles. As the surface tension evidently depends on the radius and temperature, and the critical nucleus sizes already amount to 20 to 30 in atomic diameter at high temperatures, clear deviations from the model can only be observed at very low temperatures with tiny nucleus sizes. Presumably, different values for the surface tension for different bubble radii would need to be taken into account in the theoretical model. Furthermore, the researchers were able to show that the critical size of the gas bubble at which it remains stable tallies well with the CNT prediction. Another important result of the study for the researchers is the fact that no temperature hotspots could be observed in the areas where the condensation nuclei form, as was posited by another study. In the simulations by Diemand and his team, nucleation took place at average temperatures.

The simulations bring the researchers closer to the reality of phase transition than observations or experiments. Using the computer experiment and the visualisations of the calculations, it is possible to follow and study the rapid processes. Surprisingly, the depiction of Diemand’s group’s simulations reveals that the bubbles depicted are not sharply defined or perfectly round, as was commonly assumed. And a broad “ribbon” is apparent during the phase transition from liquid to gas instead of a sharp divide, Diemand notes.

Diemand and his team are currently researching the behaviour of metastable liquids that are used as dark matter detectors. Dark matter, which was posited based on astronomical observations, is an omnipresent mass of an unknown composition in the universe. According to current estimates, it makes up 85 per cent of the universe’s matter. Using a special method, it should be possible to detect dark matter as soon as it hits a nucleus of a metastable liquid enclosed in a detector. The collision should produce a gas bubble that can be registered with measuring devices. Similar detectors, so-called bubble chambers, were used successfully at Cern and other particle accelerators in the 1960s and 1970s. The method is currently making a comeback in the search for dark matter. While the theoretical model to calculate the phase transition in the detectors stems from the 1960s and is based on the CNT, it has never been tested with simulations.  As a result, nobody knows how well it describes the reality and what really happens microscopically, says Diemand. He and his team are now clarifying this using new simulations in collaboration with researchers from the European SIMPLE experiment (Superheated Instrument for Massive ParticLe Experiments), which is seeking evidence of the existence of dark matter.