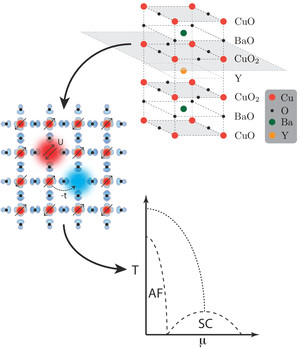 Researchers from ETH Zurich have developed an algorithm that simulates high-temperature superconductivity much faster. The team was nominated as one of the Gordon Bell Prize finalists for the project and is to be rewarded by the US Department of Energy with access to the supercomputer “Titan”.

Peter Staar, a doctoral student under Thomas Schulthess at ETH Zurich, refined an algorithm for the simulation of solid bodies like superconductors during his doctorate. Thanks to the algorithm, the researchers reach their goal considerably more rapidly than before – in some cases even up to a billion times faster, say the scientists. Using the algorithm on the supercomputer “Titan” at Oak Ridge National Laboratory, they managed to carry out 15,000 trillion computational operations per second – fifteen petaflops.  However, not only does the new algorithm work faster; the scientists have also used it to overcome two central problems in the simulation of high-temperature superconductors. Moreover, the new calculations reveal that the simplest models do not rule out superconductivity at room temperature.

The researchers themselves dub their publication, for which they were nominated for the coveted Gordon Bell Prize, a quantum leap in the so-called time-to-solution simulation of high-temperature superconductor models. The US Department of Energy honoured the team’s achievement with its INCITE Award: the scientists are to receive 2 million dollars’ worth of computing time on the supercomputer “Titan” in 2014 and will also have the opportunity to have this awarded for 2015 and 2016.

Superconductors and probably also the little-understood high-temperature superconductors are composed of materials, in the crystal lattice of which electrons arrange themselves in pairs, so-called Cooper pairs, at extremely low temperatures – at least -234° Celsius or -140° Celsius for high-temperature superconductors. A phase transition then occurs in the system, where the electrical resistance of the material becomes zero and electricity can flow without any loss of energy.

Until now, such phase transitions were simulated approximately with the algorithm DCA (Dynamical Cluster Approximation). In doing so, only a small section of the crystal lattice, a cluster of atoms, was simulated on account of the complexity of the quantum system to be modelled and the associated computational intensity of the interacting particles. “Qualitatively speaking, this works very well with the previous methods,” says Staar. “Ascertaining the exact so-called transition temperature at which a phase transition takes place quantitatively, however, was not possible until now.” The central problem of DCA is that the critical temperature depends greatly on the size of the cluster and its geometry. “This doesn’t allow us to determine a uniform and precise transition temperature.”

Through Peter Staar’s revision and extension of DCA to form the new algorithm DCA+, the clusters are basically calculated continuously as opposed to in steps, which eradicates the geometry problem. The results of the cluster are consistent, even if the geometry has been altered through a rotation in the crystal lattice, for instance. The new procedure has also made another breakthrough with the so-called fermionic sign problem, which arises when simulating quantum systems with the so-called Monte Carlo Method. With this technique, it is not possible to determine the transition temperature explicitly due to the mathematical and physical conditions.

Although the fermionic sign problem is not solved with DCA+, the effect is delayed, explains Staar. “This enables us to reach the point where the transition to superconductivity takes place and determine the transition temperature.” For him personally, however, another key aspect of these research results is the fact that the new calculations made with this simple model cannot rule out superconductivity at room temperature. If additional calculations on more complex and material-specific models confirm this, it could revitalise a discussion that has already been going on for decades. In materials science, the further development of superconductors is regarded as a promising field with many potential applications in energy technology and electronics.  Scientists have dreamt of superconductivity at room temperature ever since the 1980s, when high-temperature superconductors were first discovered.

Whether Staar has won the Gordon Bell Prize for his work together with colleagues from ETH Zurich and Oak Ridge National Laboratory will be announced on 21 November 2013 at SC13 conference. The six finalists also include a project by ETH-Zurich professor Petros Koumoutsakos and his team, which they conducted in conjunction with IBM Research Zurich and Lawrence Livermore National Laboratory (see ETH News, 15.11.2013).