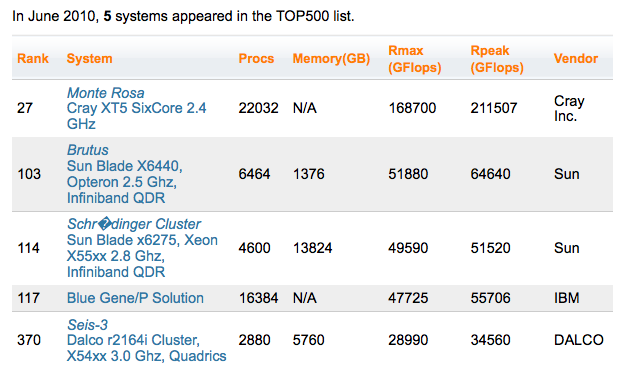 The new TOP500 list has been announced at ISC’10 conference in Hamburg. The big surprise has been the second classment of Chinese system called Nebulae, build from a Dawning TC3600 Blade system with Intel X5650 processors and NVidia Tesla C2050 GPUs.

Switzerland was able to place again 5 HPC systems in this year: From the Swiss point of view there have been no big changes respect to the November 2009 list. Without substantial upgrades all systems ranked lower . For example Monte Rosa moved from position 21 to 27. Only Brutus of ETH Zurich has been upgraded but no re-run of Linpack has been posted to the list. Brutus real placement would be around position #88 (Rmax = 63-64 TF) instead of #103, the same rank as in the previous Top500 list.