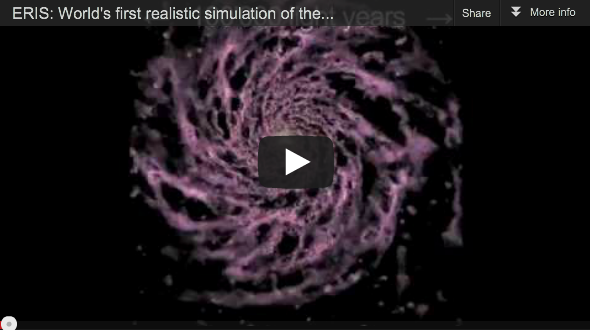 First glimpse into birth of the Milky Way

For almost 20 years astrophysicists have been trying to recreate the formation of spiral galaxies such as our Milky Way realistically. Now astrophysicists from the University of Zurich present the world’s first realistic simulation of the formation of our home galaxy together with astronomers from the University of California at Santa Cruz. The new results were partly calculated on the computer of the Swiss National Supercomputing Center (CSCS) and show, for instance, that there has to be gas on the outer edge of the Milky Way.

The aim of astrophysical simulations is to model reality in due consideration of the physical laws and processes. Astronomical sky observations and astrophysical simulations have to match up exactly. Being able to simulate a complex system like the formation of the Milky Way realistically is the ultimate proof that the underlying theories of astrophysics are correct. All previous attempts to recreate the formation of spiral galaxies like the Milky Way faltered on one of two points: Either the simulated spiral galaxies displayed too many stars at the center or the overall stellar mass was several times too big. A research group jointly run by Lucio Mayer, an astrophysicist at the University of Zurich, and Piero Madau, an astronomer at University of California at Santa Cruz, is now publishing the first realistic simulation of the formation of the Milky Way in the Astrophysical Journal. Javiera Guedes and Simone Callegari, who are PhD students at Santa Cruz and the University of Zurich respectively, performed the simulation and analyzed the data. Guedes will be working on the formation of galaxies as a postdoc in Zurich from the fall.

For their study, the scientists developed a highly complex simulation in which a spiral galaxy similar to the Milky Way develops by itself without further intervention. Named after Eris, the Greek goddess of strife and discord, because of the decades of debate surrounding the formation of spiral galaxies, the simulation offers a glimpse in time lapse into almost the entire genesis of a spiral galaxy. Its origins date back to less than a million years after the Big Bang. “Our result shows that a realistic spiral galaxy can be formed based on the basic principles of the cold dark matter paradigm and the physical laws of gravity, fluid dynamics and radiation physics,” explains Mayer.

The simulation also shows that in an entity that is supposed to develop into a spiral galaxy, the stars
form in the areas where giant cloud complexes are. In these cold giant molecular clouds, the gas exhibits extremely high densities. The star formation and distribution there does not occur uniformly, but rather in clumps and clusters. This in turn results in a considerably greater build-up of heat through local supernova explosions. Through this massive build-up of heat, visible standard matter is removed at high redshift. This prevents the formation of a bulge in the center of the galaxy. The removal of baryonic matter, as the visible standard matter is also known, also reduces the overall mass of the gas present at the center. This results in the formation of the correct stellar mass, as can be observed in the Milky Way. At the end of the simulation, a thin, curved disk results that corresponds fully to the astronomical observations of the Milky Way in terms of the mass, angular momentum and rotation velocity ratios. On the left the simulated galaxy after 13 billion of years. The gas clouds are represented in red, the stars in blue. On the right as comparison the spiral galaxy M74 that is similar to the Milky Way (University of Zurich and NASA)

For the calculations, the model Mayer and co. developed for the simulation of disk-shaped dwarf galaxies and published in the journal Nature in 2010 was refined. The high-resolution model simulates the formation of a galaxy with 790 billion solar masses and comprises 18.6 million particles, from which gas, dark matter and stars form. The high resolution of the numerical simulations is essential for the groundbreaking new results. For the calculations, the high-performance supercomputers Cray XT5 “Monte Rosa” at ETH Zurich’s Swiss National Supercomputing Center (CSCS) and the NASA Advanced Supercomputer Division’s Pleiades were used. A regular PC would have needed 570 years for the calculations.

Stars and gas at the outermost edge of the galaxy, hot gas at its center

The new simulation confirms the results for the formation of disk-shaped dwarf galaxies published by Mayer and demonstrates that the model – unlike all previous approaches – can recreate both small and extremely large galaxies realistically. Moreover, from the simulation it an also be deduced that protogalaxies with a large disk made of gas and stars at the center already formed a billion years after the Big Bang, and therefore long before our present galaxies.

Based on the simulation, the ratio of “cold dark matter” (CDM) and standard matter in spiral galaxies can also be adjusted. In order to obtain the correct overall stellar mass in the final stage of the galaxy – until now, one of the main difficulties – it is imperative that standard matter be removed from the center by supernova winds. On the strength of the simulation, it is highly probable that the ratio of standard matter to CDM on the outermost edge of the CDM rings of a spiral galaxy is 1:9, not 1:6 as previously assumed.

The simulation also predicts stars and gas for the outer halo of the Milky Way six hundred thousand light years away. Only the next generation of space probes and telescopes will be able to detect these extremely faint stars. Furthermore, the simulation makes predictions with regard to the radial distribution of hot gas around the galaxy’s central disk. Future telescopes that can measure X-rays, as the IXO Mission of the European Space Agency (ESA) is planning, for example, will test these predictions. On top, an edge-on image of our simulated galaxy, as an observer would see it if he could enter in the computer and look at the light emitted by our simulated stars. He could clearly see that the galaxy is composed by a thin disk of stars, and a brighter, small bulge at the center. At the bottom, a real image of our Milky Way galaxy as you would see it in infrared, where stars emit most of their light. Here too the Milky Way is seen edge-on, as our solar system lies in the plane of the disk.