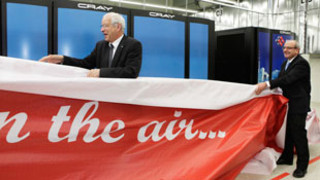 Since the end of last year, Switzerland has boasted the most powerful supercomputer in Europe: “Piz Daint”. As of today, it is officially cleared for research. For the approval, “early science” has already been conducted successfully on “Piz Daint” over the last few weeks.

Today (21 March 2014), Fritz Schiesser, the president of the ETH Board, Ralph Eichler, the president of ETH Zurich, and guests from research, politics and industry are convening in Lugano to inaugurate “Piz Daint”. The new supercomputer at the Swiss National Supercomputing Centre (CSCS) named after one of the highest mountains in Val Müstair, Grisons, is currently the most powerful computer in Europe and the flagship of supercomputing in Switzerland.

“Piz Daint” is the culmination of the first phase of the national High-­Performance Computing and Networking Strategy, which ran from 2009 to 2014 and was implemented successfully by the ETH Board on behalf of the Swiss government and CSCS. “Nowadays, research relies on tremendous computer capacity to make progress in an increasing number of fields”, says Fritz Schiesser, “«Piz Daint» is Switzerland’s response to this challenge.” Although “Piz Daint” has already been at CSCS for around a year, it was only thanks to an upgrade from twelve computer cabinets to twenty-­eight and a hybrid expansion with graphics processors (GPU), which were available in the autumn, that “Piz Daint” finally broke the petaflop barrier targeted by the strategy in October. It even reaches a theoretical peak performance of 7.8 petaflops. With around 3.2 billion computer operations (3.2 gigaflops) per watt, the combination of GPUs and conventional processors (CPUs) also makes “Piz Daint” one of the world’s most energy-­efficient supercomputers in the petaflop performance class.

For the approval of the supercomputer manufactured by Cray, Inc., the first tests with scientific data were conducted on the computer immediately after the upgrade. Thomas Schulthess, the director of CSCS, is proud of how quickly the computer with its innovative architecture for concrete scientific issues has got up and running. “Thanks to the close and dedicated collaboration between hardware producers, researchers and CSCS staff, we have succeeded in opening «Piz Daint» up for research in record time after the upgrade”, he says.

The road to success via software and hardware improvements

For Schulthess, it was clear that the growing demand for simulations in the natural sciences cannot solely be satisfied with more powerful supercomputers and that investments also need to be made in the improvement of computing algorithms and software. Consequently, the platform for High-­Performance and High-­Productivity Computing (HP2C) was launched within 2/3 the scope of the HPCN initiative. Under HP2C, developers of application software for scientific simulations in different disciplines have spent the last four years collaborating with applied mathematicians and computer scientists to create new, more efficient simulation systems with CSCS and computer manufacturers. “Piz Daint” is the result of this collaboration. “Thanks to projects like HP2C and PASC, Thomas Schulthess and his team have also managed to position Swiss researchers at the cutting edge of algorithm and software development worldwide”, says Ralph Eichler. PASC (the Platform for Advanced Scientific Computing) is the follow-­up project to HP2C.

The combination of new codes and hardware within the scope of HP2C yielded a sufficiently powerful and energy-­efficient system that enables researchers to pursue their scientific ambitions: producing a kind of tomographic model of Earth, calculating water bonds correctly in molecular dynamics or simulating a high-­resolution climate model of Europe. Earth scientists, chemists, physicists and climate scientists have done the initial groundwork for these projects and tested their newly developed codes on the brand new system – with more than satisfactory results.

The projects benefit society directly. While the earth model provides useful information for earthquake-­‐proof urban development or the discovery of oil or mineral deposits, improved simulation methods of water aid drug development or materials research. And high-­‐resolution climate models that take cloud formation into account should form the basis for adaptation strategies in a changing climate – to adapt the drainage systems in regions where heavy rainfall is expected in future in such a way as to prevent flooding, for instance.

Scientists from all disciplines can apply for computer time on “Piz Daint” every six months. For large-­‐scale, ‘state-­‐of-­‐the-­‐art’ projects that are expected to have a high scientific impact, however, there is an annual application deadline. The computer time is allocated by an independent committee of specialists.