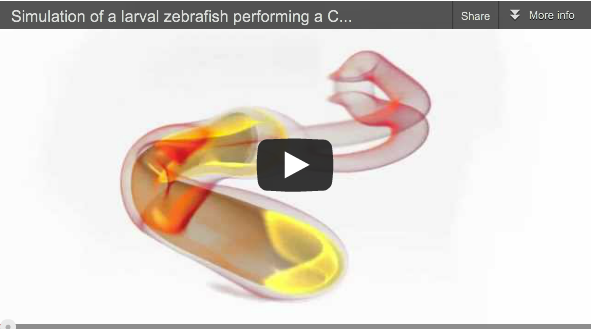 Small fish bend themselves into a ‘C’ shape before they flee from predators.

Observations have suggested that this shape helps them to abruptly put the greatest distance possible between themselves and their predators.

Petros Koumoutsakos, a professor at the Computational Science & Engineering Laboratory » at ETH Zurich, and two of his doctoral students, Mattia Gazzola and Wim Van Rees, tested this hypothesis for the first time using a supercomputer combining a three-dimensional flow simulation with an  evolutionary optimization algorithm.

The analysis showed that the more water is accelerated by the fish, the more they accelerated themselves. The created vortical structures play a lesser role in the escape process than had been assumed thus far. The fish use their entire body to escape (by means of the C-start), so that they can displace much larger volumes of water, to accelerating themselves.

These results can be applied for example to wind turbines and energy generation devices inspired by fish.

This simulation has been computed at CSCS Swiss National Supercomputing Centre. Read more about the simulation on the CSCS web pages »