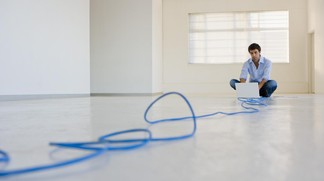 A new-generation analog-to-digital converter (ADC) developed by a joint IBM-EPFL team has the potential to greatly increase the speed and volume of data that can be transferred over the Internet.

Images, audio, and video could soon travel through cyberspace much faster, using less energy, thanks to a new generation of analog-to-digital converters (ADCs) developed jointly by IBM and EPFL’s Microelectronics Systems Laboratory. This technological advance was presented recently at the International Solid-State Circuits Conference, one of the most important annual international electronics conferences, in San Francisco.

ADCs are essential to electronics. Integrated into the chips on our computers and into optical fiber networks, they translate analog signals – images and sounds from the physical world in which we live – into digital information, that is, coded into a series of zeroes and ones. In this format the information can be read by and saved on computers.

There’s just one problem: the total volume of data transferred over the Internet is exploding – it’s estimated to be increasing by 60% every year. Current converters are simply not up to the task. “Most ADCs on the market are not designed for the volume of data that we’re seeing today,” explains Martin Schmatz, head of the Systems Department at the IBM Research Center. “It’s a bit like trying to force the flow of a firehose through a straw.”

A billion conversions per second

According to Yusuf Leblebici, director of EPFL’s Microelectronics Systems Laboratory, the new ADC is not only twice as rapid as other existing designs, but it also holds the record for occupying the smallest area on the silicon chip, thus making it the most compact and energy efficient ADC to date.

In technical terms, it can generate one billion analog/digital conversions per second, with a total electricity consumption of 3.1 milliwatts (mW), or thirty times less than a mobile phone on standby. Using this ADC, the speed of Internet connections could be increased to 100 gigabits per second (Gb/s), thus doubling current capacity.

Numerous devices will benefit from this invention: supercomputers, modems, tablets, cellphones. It should be on the market by 2014. It will also be put to use in scientific projects, such as DOME, a joint project between IBM and the Netherlands Institute for Radio Astronomy (Astron) whose goal is to gather and convert radio signals coming from space. Forty million ADCs will be installed in a huge, extremely sensitive radio telescope that will be used to explore distant galaxies, dark matter and the origins of the universe.

There are many other applications, as well. Images transmitted for on-demand television will be better quality – clearer and more lifelike, says Leblebici. “It will be like going from 1930s radio to high-definition TV.”