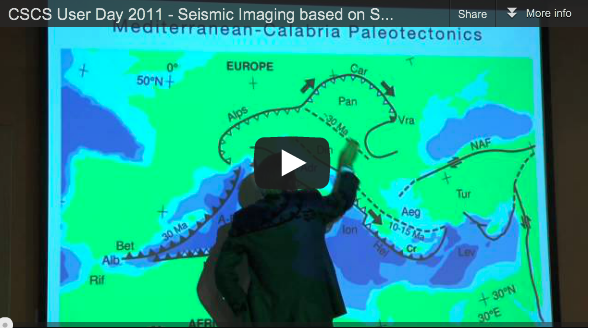 An invited guest at CSCS User Day 2011 was the geophysicist Jeroen Tromp of Princeton University who, together with other scientists, uses an ingenious method to create a realistic simulation and image of the Earth’s crust and its mantle under Europe.

For this the researchers used the data from 160 earthquakes, which they simulated in a simple model of the Earth’s interior. They then iteratively reduced the misfit of the data of the recorded seismic waves of the earthquakes by decreasing the differences between the simulated and the available data through computer-assisted adjustments and refinements of the model. After 11,200 simulations they obtained a tomographic image of the crust and the earth’s mantle below Europe. The aim now is to represent the whole terrestrial globe tomographically based on 5000 earthquakes.