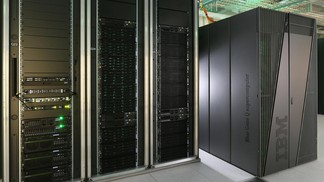 Since January 28, researchers from EPFL and the Universities of Geneva and Lausanne have benefitted from a new supercomputer, the BlueGene/Q. This computer is four times more powerful than its predecessor – it can perform 172,000 billion operations per second! With low energy consumption, it also is counted among the Top 10 greenest supercomputers in the world.

The computational capabilities of the Lake Geneva region are ramping up. After the BlueGene/L, installed in 2005, then the BlueGene/P, which entered service in 2009, the latest addition to the range of IBM supercomputers, the BlueGene/Q, assumed its place at EPFL last November. After undergoing a series of tests, it has been operational since January 28, and has been made available to researchers from EPFL and the Universities of Geneva (UNIGE) and Lausanne (UNIL) through the consortium CADMOS (Center for Advanced Modeling Science), the Geneva center for high performance computing shared by these three institutions.

With this new tool, research on complex systems, such as the brain, the climate, or the Earth’s surface, can soar to new heights. Medical research can also benefit by improving treatments for certain illnesses such as cerebral aneurisms.

With 1024 computation nodes, the BlueGene/Q has a calculation power of 172.7 teraflops, which means it can do 172,000 billion operations per second. That is four times more than the functioning capacity of BlueGene/P thus far. It is also much smaller, given that it fits in a single cabinet, whereas its predecessor required four. Twenty-five BlueGene/Q are already operational around the world. However, the one from Lake Geneva has a mass storage management system (2.2 petabytes) that is unique in the world today.

Despite its great power, the BlueGene/Q requires very little energy. Water-cooled, it consumes only 82.2 kilowatts of electricity, the energy equivalent of a mere one-hundred household coffeemakers working continuously. This excellent energy efficiency places it in tenth position in the list of the world’s greenest supercomputers.

From the brain and medical research to the Rhône
As the issues scientists face become increasingly complex, their resolution requires ever higher computational power. Twenty teams can leverage the capabilities of BlueGene/Q to make great headway with their research.

Among potential supercomputer users are the EPFL plasma physics research center at EPFL. Also, geophycisists of UNIL are trying to simulate the physics involved in plate tectonics. Furthermore, computer scientists of the University of Geneva (UNIGE) are modeling the Rhône River between Geneva and Verbois in an effort to better understand how sediments are deposited. But potential users also include climatologists, astrophysicists, or even experts in biology and computational chemistry who need powerful computers to process large amounts data. Let us not forget the mathematicians who build simulation models of the heart and arteries to predict diseases of the circulatory system.

Biomedical research, too, could benefit greatly from this supercomputer. This includes notable research by oncologists at UNIL, as well as by researchers at UNIGE who simulate the process of thrombosis in cerebral aneurisms. Their goal is not only to understand biomechanical phenomena at work, but also to help doctors propose the most appropriate treatment for each patient.

The acquisition of BlueGene/Q furthermore enables the CADMOS consortium to consolidate its expertise in the field of this family of IBM supercomputers and for scientists of the Lake Geneva region to expand their acquired competencies in scientific calculation. Thereby they will be ready for the next big step, “exa-scale,” which will complete about one billion billion operations per second. This objective won’t be reached until 2020, and along the way, numerous steps must first be accomplished, both in hardware and applications. With BlueGene/Q, Lake Geneva stays in the race.